Super Bowl ‘Maybes’? Why It’s Important to Take a Closer Look at Data

“Data suggests that 9 months after a Super Bowl victory, winning cities see a rise in births.”

The (slightly disturbing) implication of this advertisement is that the Super Bowl is such an exciting, romantic event for the winners that, well, one gestation period later we are blessed with a crop of the titular Super Bowl Babies.

Given the historical problems that the NFL has had with honesty in data, this seemingly-innocuous claim has led many to ask: Are Super Bowl Babies real? The NFL will not reveal the underlying data source they are using to justify the claim of these babies’ existence, so I thought I’d give the analysis of this phenomenon a shot.*

There are a few possible variants of the Super Bowl Babies Hypothesis (SBBH™) that come to mind, given that nine months after the Super Bowl falls in November, but I’ll focus on just one of them:

“If a city wins the Super Bowl, then they will have a greater number of births in November of that year relative to November of past years when they did not win.”

To analyze this, I first collected the locations of past Super Bowl participants, a list which is available on Wikipedia. After recording the city and county of the participating teams, I found birth rate information using both county-level public birth data from the National Community Health Survey (NCHS) and anonymized city-level medical claims data.

In the below graph, the horizontal axis is the Super Bowl year and the vertical axis is the percentage change in November birth rate from the previous year. The national average is in the top pane, and the winning teams appear in the bottom pane.

For years with an increase in the birth rate, the colored line extends above the solid black line that represents no change from the previous year. If the SBBH holds, then I would expect the majority of the lines on the bottom plot to be extending upwards. 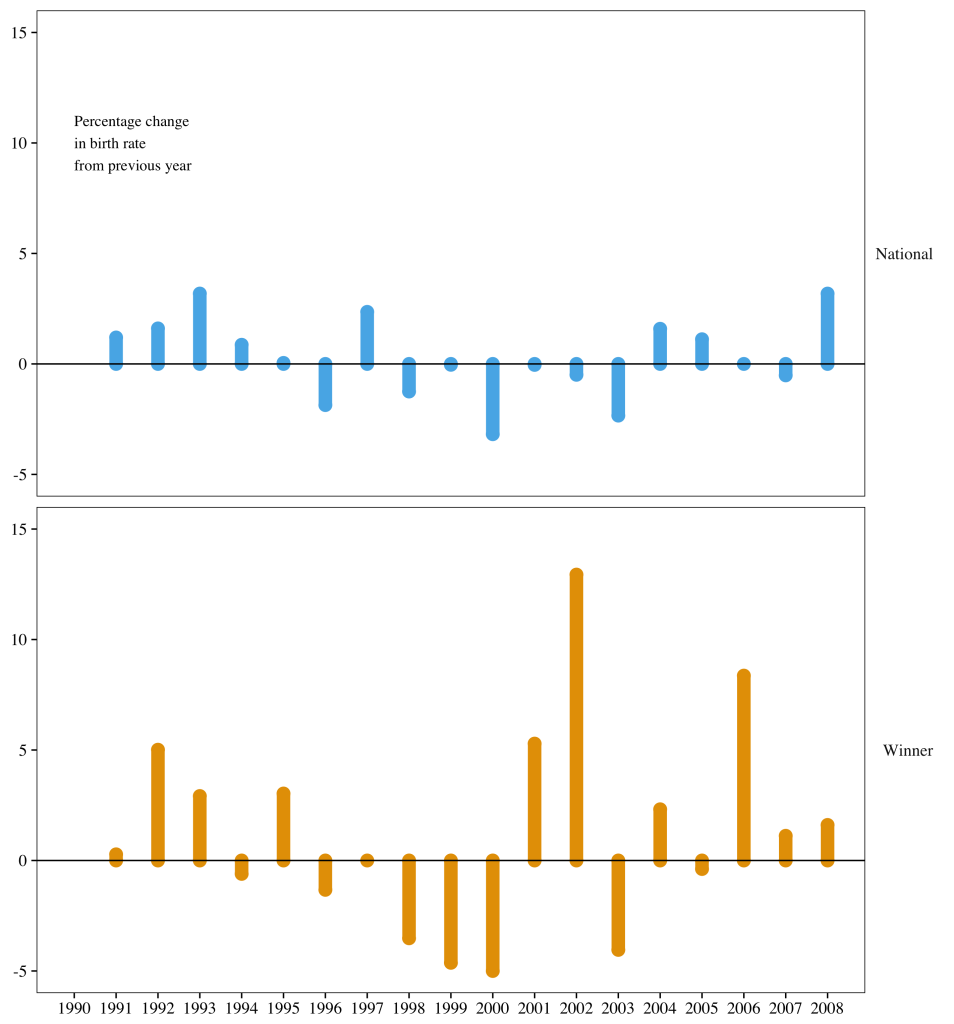 As you can see, this is not the case, and there aren’t any obvious trends besides larger variation in the birth rates in winning cities as compared to the variations in national birth rates. Looking at the winning teams, there’s about a 50/50 split between the times that the birth rate rose significantly after winning and the times that the birth rate dropped significantly after winning, with the rest remaining relatively constant. The national average rose exactly 50% of the time, but by smaller amounts (the smaller size of the effect is possibly due to the higher volatility of city birth rates due to smaller sample size).

A comparison against losing cities shows the same thing: 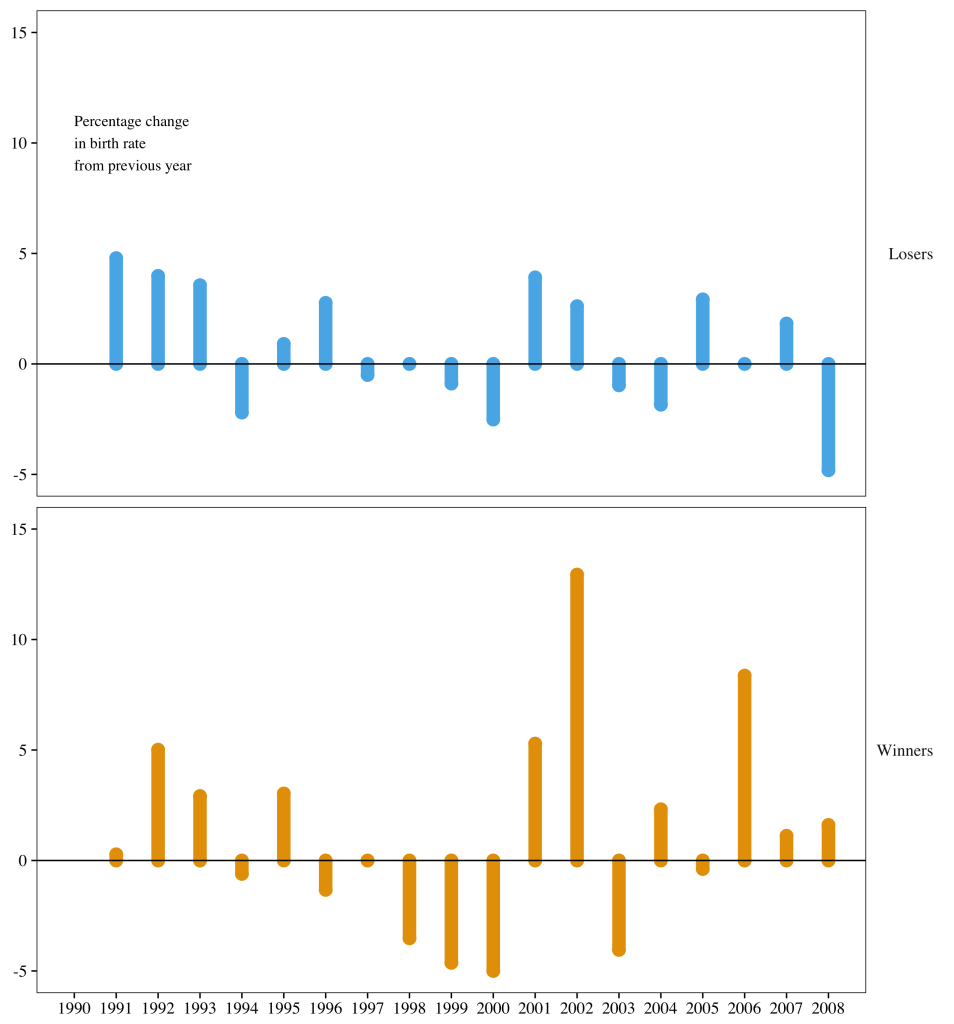 If you get into the statistics, they also bear out this apparent lack of pattern, no matter how you try and cut the data or which variant of the SBBH you consider. For example, the relative change in the birth rate between the prior year and the present year is, on average, 0.5% higher in the cities that won. While this is in the “correct” direction to support SBBH, this is entirely attributable to statistical chance. In fact, there is a 46% probability that the effect goes in the other direction and there is a lower relative birth rate in cities that won the Super Bowl! The same is true if you compare the birth rate for winning cities with losing cities in a given year, the birth rates per capita for winning cities against the birth rates in previous years, etc.

All of this to say: A first analysis indicates that there is not any strong evidence for the existence of Super Bowl Babies. Now, that’s not to say that Super Bowl Babies aren’t real, it’s just that I can’t make the immediate conclusion that they are from the available data.

What’s the takeaway from all of this? Most people are not going to have the time, access to data, or knowledge of statistics that is required to go through this analysis, and it’s probably a silly thing to do—at the end of the day, Super Bowl Babies aren’t all that important, and we might as well believe in them for the sake of enjoying a weird Seal cover. Unfortunately, this same statement applies to things that are actually very important—making major medical decisions, for example.

The vast majority of those who interact with the world of medicine do not have the time, information, or expertise to make the best decision on their own. Thus, patients often end up randomly choosing a physician who:

1. Is covered by their insurance;
2. Isn’t too far away;
3. Was recommended by a friend or family member.

There are many other important factors that should be taken into consideration when choosing a physician, including their relevant expertise, clinical judgement and communication abilities. We see from analysis of medical data and a growing volume of personal anecdotes that these factors can make a big difference in patient outcomes, even when they relate to something like routine primary care. At Grand Rounds, we have the time, data, and expertise to help our patients make informed choices about which physicians are appropriate for their needs. Altogether, this leads to better outcomes that often makes dramatic differences in the lives of our patients.

* As I was preparing this post, I discovered that Ashutosh Garg, a Masters student at NCSU, has done a cursory analysis of the public data I have been looking at, which similarly shows that at first glance there is not an obvious relationship between Super Bowl victory and an uptick in births. Because there are some choices in determining what county is associated to the winner, there are some differences in the particulars of our analyses, but the overall conclusion is the same.