Grand Rounds is committed to partnering with employers to connect their employees with the highest quality physicians. In evolving our physician quality algorithm, our Data Science team is continually evaluating physicians’ clinical practice patterns, and the results paint a stark portrait of medicine today.

ANXIETY TREATMENT: Not all doctors are created equal.

There has been extensive media coverage and national concern around opioid use in the U.S. But prescription drug abuse in the U.S. extends far beyond opioids. In this post, we will examine the prescribing of benzodiazepines (BZDs) for anxiety. The names of these drugs are likely familiar to most (e.g., Xanax, Valium), but for all the attention paid to opioids, surprisingly little coverage has been given to the role BZDs play in the prescription drug abuse crisis. 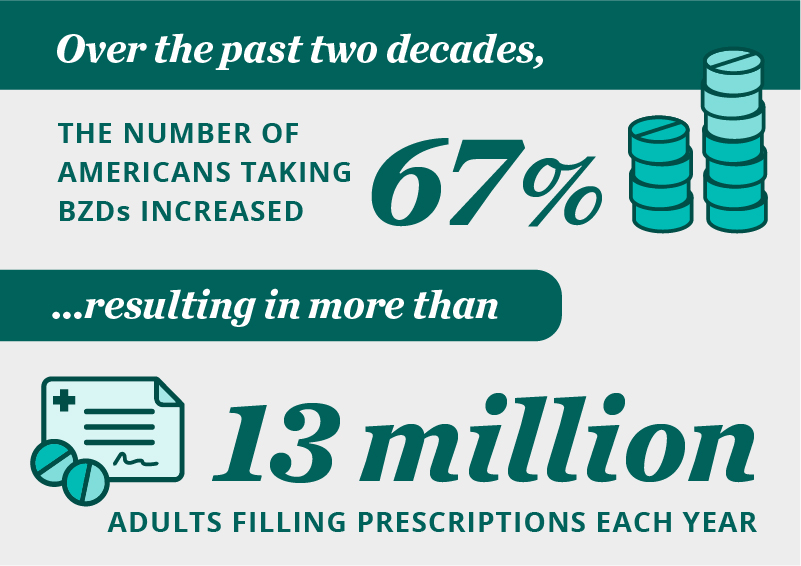 Over the past two decades, the number of Americans taking BZDs increased by 67%, resulting in more than 13 million American adults filling BZD prescriptions each year.1 These medications can be highly addictive, and the rate of overdose deaths involving BZDs has skyrocketed over the same time period, increasing by more than 400%.2 To put these numbers in context: the CDC estimates that BZDs are now involved in almost one in every three prescription drug abuse deaths.3

BZDs are primarily used to treat anxiety, sleep disorders, and other mood-related disorders. While BZDs’ sedative properties can offer rapid symptomatic relief, they do nothing to reduce anxiety permanently and carry a substantial risk of addiction, falls and fractures, and motor vehicle accidents. Because of these risks, BZDs are not recommended as a first-line treatment option and should generally be reserved for only severe cases that are nonresponsive to other treatment options, such as psychotherapy and SSRI/SNRI antidepressants. BZDs are particularly discouraged among elderly patients, who face dramatically higher risks of falls and fractures, and patients with a history of substance abuse or who are concurrently taking opioids.

Many countries have made dramatic efforts to curb BZD prescribing and use, ranging from providing monetary incentives to physicians who reduce their prescribing of these medications, to restricting long-time BZD users’ ability to renew their driver’s licenses.5 By comparison, the U.S. has done relatively little to reduce abuse or inappropriate prescribing aside from classifying BZDs as a Schedule IV controlled substance. This classification simply requires that physicians write new prescriptions for BZD patients every six months and limits the number of refills.

In the absence of stricter regulations, we ask the question: to what degree does physician prescribing of BZD actually vary? In our analysis below, we look at the rate at which high-quality and low-quality physicians prescribe two of the most common BZDs, Xanax and Valium, to patients experiencing anxiety. We evaluated both primary care physicians (PCP) and psychiatrists, as both of these specialties are frequent prescribers of these medications. In fact, one recent study found that 44% of patients on BZDs received at least one BZD prescription from their PCP.6

This disparity in prescribing across physicians suggests a patient’s chances of being put on a BZD is largely a function of the doctor they choose to see. Given the risks associated with this class of medications, connecting patients with physicians who are judicious in their prescribing is essential. Treating addiction is extremely difficult; simply avoiding unnecessary prescriptions that lead to this abuse is a far easier and more effective approach. This is an urgent issue and employers can make a huge difference by helping their employees navigate the health care system and ensuring they receive care from high quality providers.

Using more than seven billion data points, Grand Rounds has assessed over 96% of practicing physicians in the United States to identify the highest quality doctors in each specialty. As an employer, partnering with Grand Rounds can help your employees find physicians with the skill and judgment needed to guide your employees on the best clinical path.