Do Consumers Care About Physician Quality?

As principles of consumerism become increasingly prominent in health care, there are a growing number of resources available to patients to help them select their doctors. To date, these resources have operated under the assumption that most people care immensely about cost and convenience, but are relatively uninterested in information about quality. But is this true? Are consumers truly uninterested in information about the quality of their doctors? And how can we even begin to assert this when so little information regarding quality is available to the public? There is a cognitive dissonance between two enduring maxims about provider quality: on the one hand, we lament the limitations of existing quality metrics while on the other, we decry the fact that consumers are not more responsive to such metrics. Given the traditional absence of good quality indicators, is it really so irrational for people to focus on factors like convenience and the friendliness of front office staff?

Understanding these questions is critical to our mission at Grand Rounds of matching members with high-quality providers for their needs. Recommending a phenomenal doctor achieves nothing if s/he is too far away or has no upcoming appointment availability. But what to do when getting high-quality care necessitates traveling a bit further than normal or waiting a week longer for an appointment? If consumers are inevitably going to optimize for convenience, this is a moot point. On the other hand, if consumers are willing to sacrifice convenience for the sake of quality, there is an opportunity to help people understand when it may be worth traveling further or waiting longer to get the best possible care.

To get a better sense of how patients respond to information on quality, Grand Rounds recently surveyed more than 1,100 covered members on what matters to them when choosing a physician. The results are striking and suggest that conventional assumptions on this topic warrant revision.

What did we find?

The results suggest the vast majority of members do, in fact, appear willing to sacrifice convenience in response to physician quality information, but their willingness to do so is highly contingent on what/how information is presented. Moreover, traditional metrics like patient ratings, prescribing rates, and volume of patients seen were not nearly as compelling to respondents as more qualitative, contextualized statements about a doctor’s clinical expertise.

We are not talking about slight differences in behavior, either. Respondents who indicated they typically prioritize appointment availability when selecting a doctor were 4x more likely to sacrifice availability in favor of clinical expertise when presented with a novel version of physician profiles compared to a set of more traditional profiles.

What survey questions lead to these findings?

These findings are based on the part of the survey where respondents were asked to choose which of two hypothetical doctors they would prefer to see if they were experiencing headaches. Respondents were randomly assigned to see one of the two different versions of the profiles shown below. The first set of profiles (Cohort A) are relatively conventional in the way they present common metrics on providers’ clinical experience and patient satisfaction. In contrast, the second set of profiles (Cohort B) contain highly contextualized quality information that is less quantitative and more explicitly positive or negative when describing the doctor. 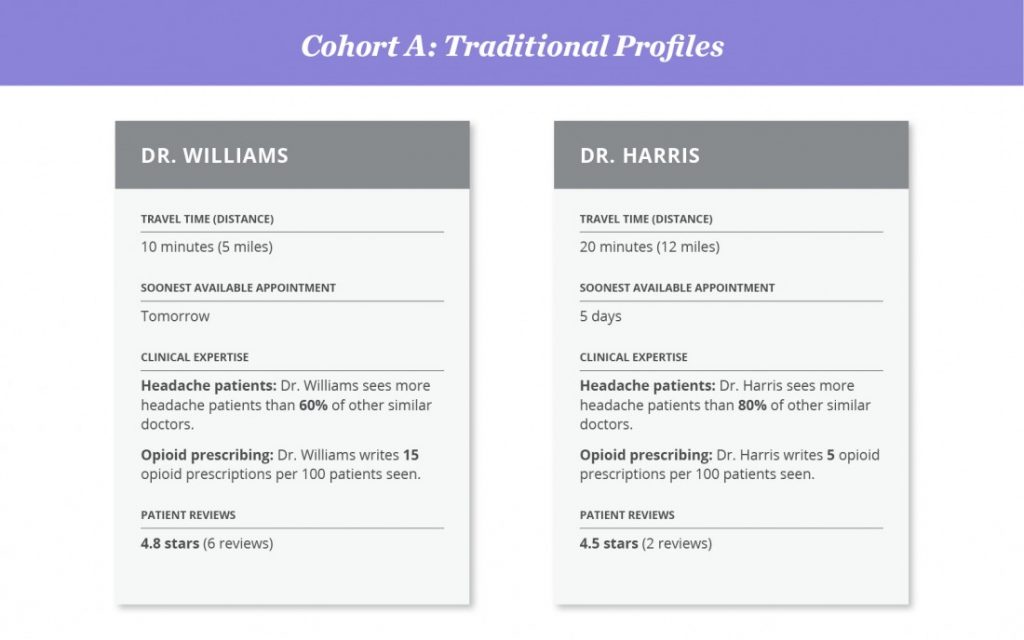 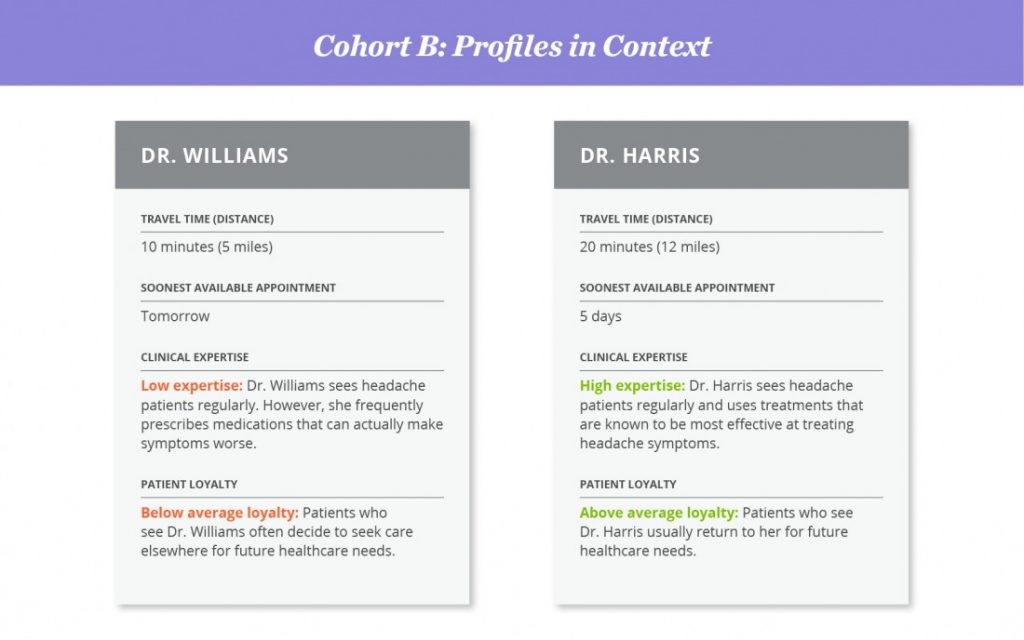 Did the different profiles influence which doctor people chose?

Respondents’ choice of doctor was impacted significantly by which profile versions they saw. Those who saw the traditional profiles were highly divided in their choice, with 51% opting for Dr. Harris and 49% going with Dr. Williams. In contrast, an overwhelming 91% of respondents who saw the contextualized profiles chose Dr. Harris (the higher quality option). 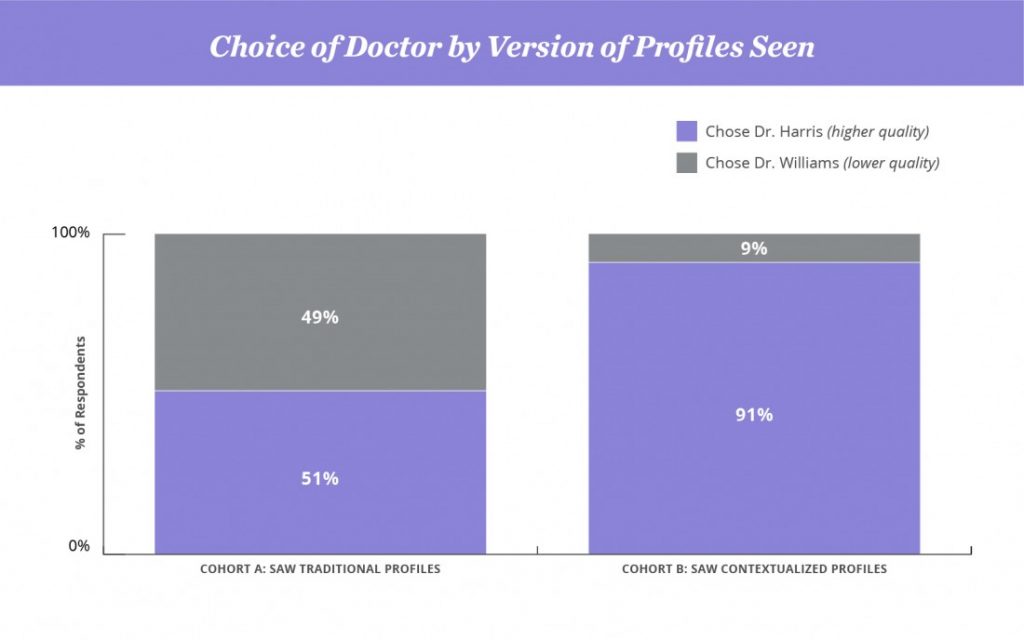 To what degree did perceived quality factor into people’s choice of doctor?

After asking respondents to choose between Dr. Harris and Dr. Williams, we then asked what factor was most important in making their decision. Their answers to this question yielded two basic insights:

Where things get really interesting, though, is if you look specifically at people who tend to prioritize convenience when choosing a doctor. We were able to look at this by segmenting our survey results based on an earlier question, in which we had asked people about what matters most to them when they are looking for a doctor (this was asked before respondents were shown any doctor profiles).

How did people who typically prioritize convenience choose among the options presented?

The version of profiles seen had a profound impact on people who said they typically choose doctors based on appointment availability or travel convenience. As the figure below illustrates, very few of these respondents chose Dr. Harris (the higher quality option) if they saw the traditional, metric-heavy profiles, whereas almost 80% of them chose Dr. Harris if they saw the contextualized profiles. 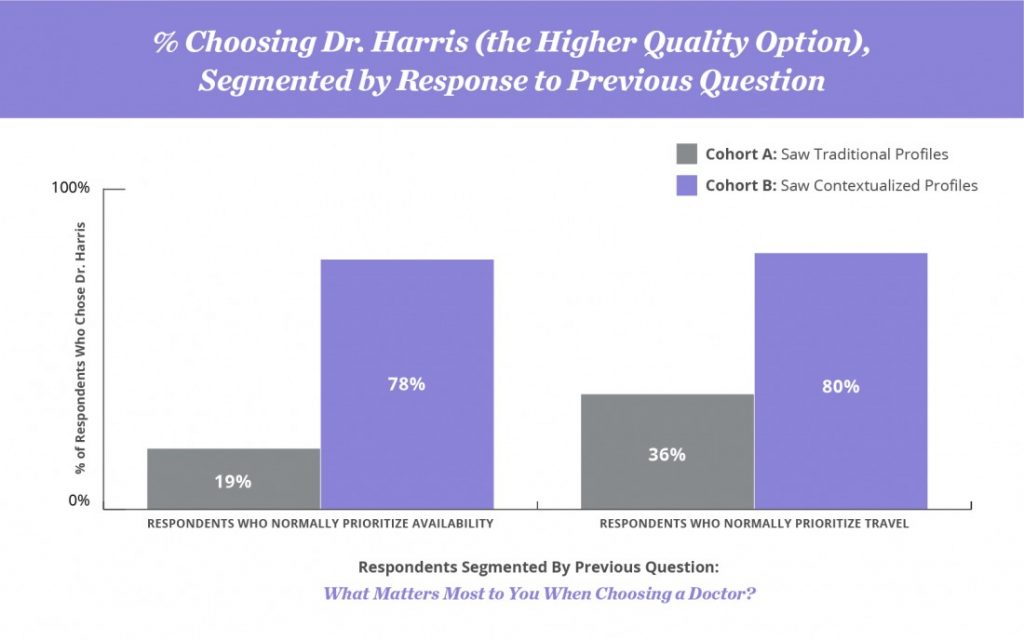 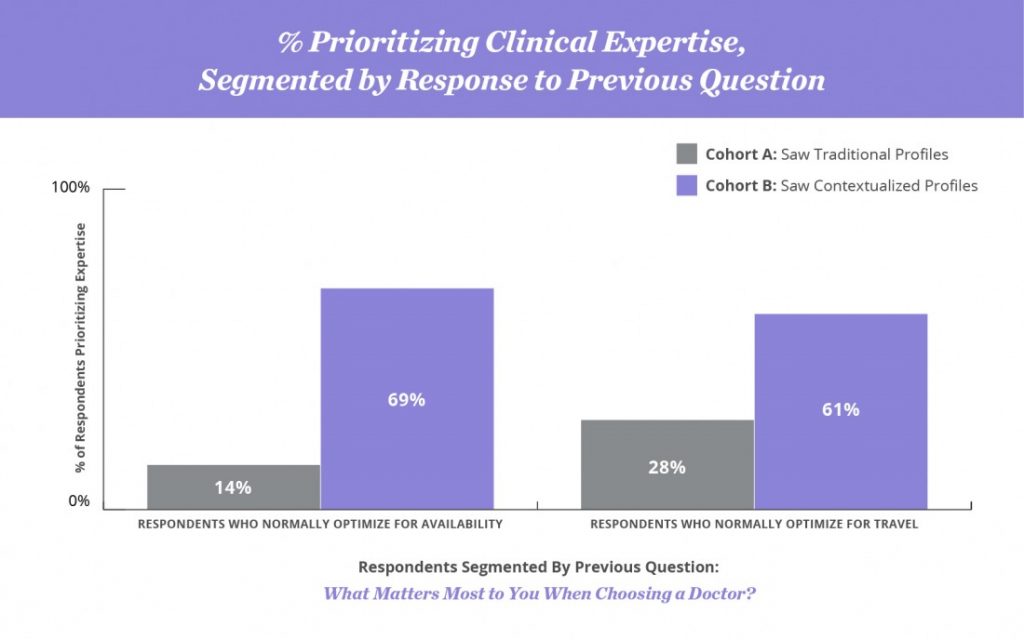 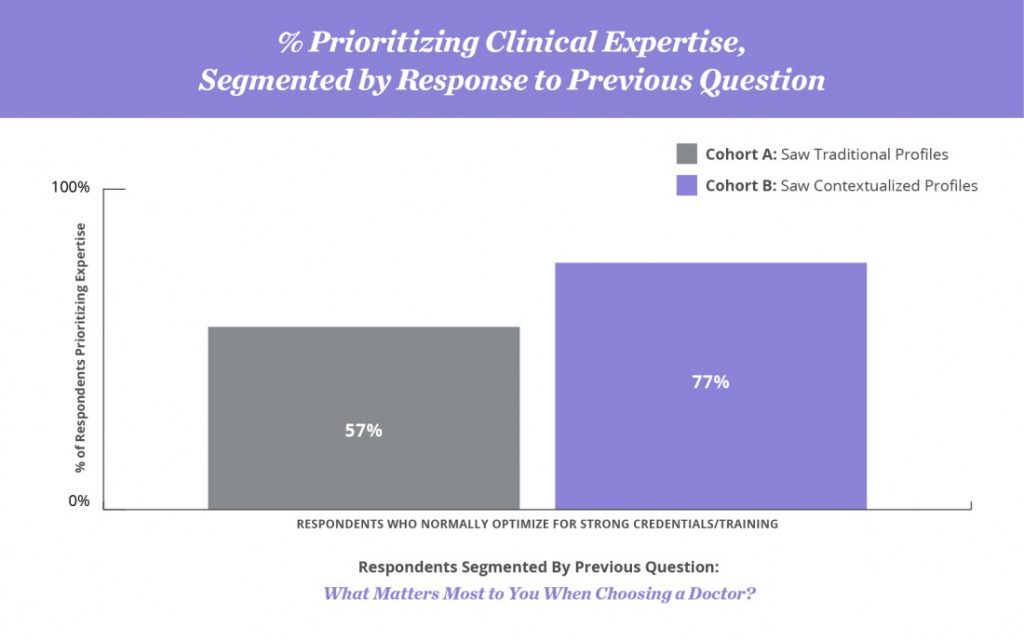 Where do we go from here?

This survey is just a start. The first iteration has many limitations: the sample consisted solely of members who are registered with Grand Rounds, the travel and availability differences between the two options presented were relatively mild, and further scenario testing would be required to understand exactly what factors had the greatest influence on patient perceptions and choice. The basic message is clear, though: the way in which information is presented can have a significant impact on whether patients prioritize convenience over quality.

As the quality reporting landscape changes, we should be wary of drawing strong conclusions about what patients do and do not care about without explicit testing. Past disregard for quality information should be taken only as disregard for that specific information, not of physician quality, in general.

Historically, the absence of good metrics to assess quality meant that questions about patient preference didn’t really matter that much. Optimizing for convenience was the only option. That paradigm is changing, though. Better ways to assess quality are becoming available, such that it is now worth compromising on convenience in ways that might not have made sense in the past. Consumers are not going to automatically buy into whatever is presented to them, though, and the metrics that appeal to providers won’t necessarily be the same ones that resonate with consumers. If people are not convinced by the information we share, the onus is on us to do better. The provider quality field needs to prove itself to patients, not the other way around.